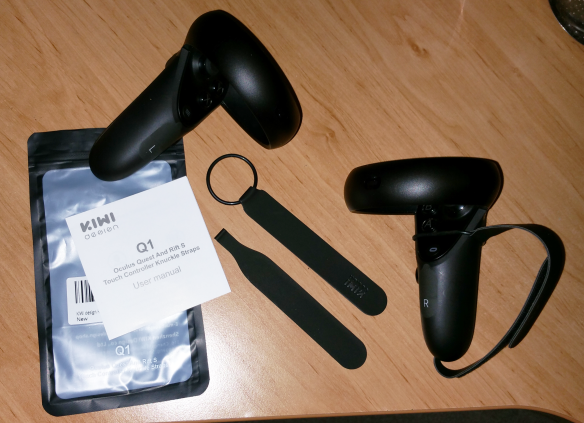 KIWI Design was so kind to supply me with a pair of straps and they are quite neat. I didn’t like them as much as the AMVR straps, but that is mostly because I really like that the grip gets a bit bigger for my big hands where the situation stays pretty much the same with the KIWI straps.

A big benefit is that changing batteries is quicker with the KIWI straps. They also look a little nicer and utilizing the fastening option of the original straps is a great idea.
I did miss the elastic feel of the AMVR straps though, after being used to those for such a long time the KIWI does feel a bit loose to me. But they never came off and offer just the same functionality, so it is just a matter of preference.

At the end of the day I guess you really should pick between the two by hand size. If you are perfectly comfortable with the Touch controllers the way they are, then I think the KIWI will be right for you, but if you are like me and would wish for them to be a bit bigger the AMVR makes for the better choice.

The image shows the official way to fix it to the controller with the rubber ring around the grip and right below the buttons – which takes a little getting used to, but they don’t really impact it. Many are actually using the ring around the controller ring that contains the IR LEDs, but I didn’t want to go there as I am a bit afraid that the ring might be more likely to break with the additional pull from the strap. But I am probably too careful, so if you find the ring annoying you still have that alternative fixing option.